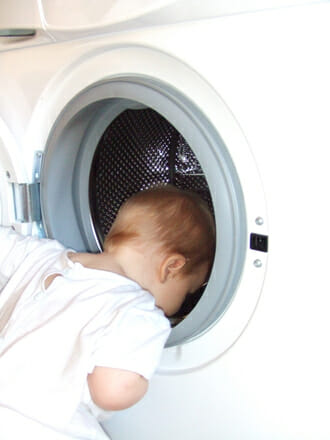 Why Are Your Pipes Banging?

It can be very disconcerting when you run your washing machine or flush a toilet and hear a banging noise in your walls. The issue is called “water hammer, ” and it can be quite problematic. Here we will explore the causes of this phenomenon and what can be done to correct it. The Causes of Water Hammer: In order to grasp the causes of the water hammer phenomenon, consider a train. It chugs along at full speed when suddenly a boulder falls onto the tracks. As the train crashes, it causes every one of the train cars to crash into the one in front. This is a massive amount of disruption and commotion. Although it’s not quite as dramatic, a similar effect happens inside your plumbing pipes with pressure irregularities. If you flush a toilet, it prompts water to quickly rush through the pipes. When the toilet finishes filling, a valve is suddenly close, which sometimes causes the pipe to bang against the inside of the wall. Eliminating Water Hammer: Obviously, anything hitting your wall has the potential to cause damage. So, it is important to correct the water hammer. Correcting the problem depends on how your home was built and when it was constructed. In homes built before 1960, it was likely to have been built with air chambers installed to prevent water hammer. Air chambers are simply pipes connected to the main water pipes using a “T” fitting that is capped at the top. The capped off pipe is filled with air, and this acts as a buffer to compress and absorb the shock. In the train analogy, this air chamber would be like having a switch in the tracks to allow the train driver to avoid the boulder and come to a complete stop safely. Unfortunately, this system is not foolproof as eventually the air chambers can become filled with water. This renders them ineffective and can cause water hammer. Luckily, there is a simple fix. All you need to do is turn off your home’s water supply and drain all the water from the pipes. You will need to flush every toilet, open every faucet and run your dishwasher and washing machine. Then turn your water supply back on. If your home was built between 1960 and 1990, it is not likely to have no or limited water hammer protection. So, you may need to have water hammer arrestors installed by a professional plumber. Fortunately, after 1990, homes were built with arrestors, so you shouldn’t have an issue. What Is a Water Hammer Arrestor: A water hammer arrestor is a small device that can be connected to a water pipe. It contains a spring loaded, small shock absorber. This diverts the water force when the faucet or valve is shut off to greatly reduce water hammer. The main advantage of an arrestor is that unlike an old fashioned air chamber, it never becomes waterlogged. You will need a professional plumber to install your arrestors, but it should immediately have an effect on the banging noises. By Giovanni Longo President Flood Brothers Plumbing Giovanni Longo is a 3rd generation master plumber who has been practicing his craft and trade in the greater Los Angeles area for well over a decade and a half. A plumbing and hydraulics-engineering innovator, Giovanni’s particular world-class expertise focuses on dealing with challenging sewer system designs as well as resolving complex commercial and residential draining issues. As a certified Flood Mitigation expert, he is also well versed in a wide variety of water damage and remediation solutions.